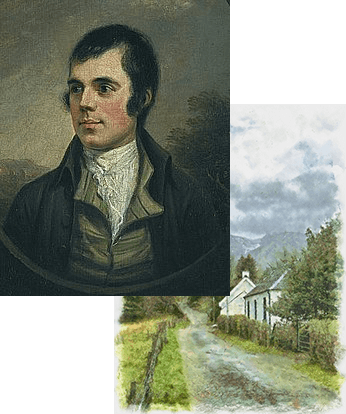 Robbie  was born on a farm in Ayr and lived at a time of reformation, discovery and revolution. Robbie tended the fields and studied. He briefly became a flax spinner in Irvine, a busy sea port, before returning to the family farm and writing his first book “Poems, Chiefly in the Scottish Dialect” published in Kilmarnock in 1786. He quickly became famous both in Edinburgh and throughout Great Britain. He toured the regions of Scotland enjoying raucous company and rigorous intellectual debate while penning his poems and songs including “Auld Langs Syne,” “My Love Is Like a Red Red Rose” and “To a Mouse” before dying of illness aged 37 on July 25th, 1796.

His funeral was attended by thousands. On the day he was buried his 14th child  “Maxwell” was born.

11 Interesting Things To Know About The Scottish Poet Robbie Burns

There are volumes of books, lessons, biographies and literature papers published on the life and times of Robbie Burns.  For those new to Robert “Robbie” Burns here are eleven interesting things to learn about “the Bard”…